This phishing attack shows how vulnerable anyone in the U.S. can be targeted by cybercriminals, along with foreign adversaries. This news comes in lieu of U.S. officials announcing that Iran and Russia obtained voter registration data in hopes of interfering with the 2020 U.S. election.

TrustWave provided publicly available data, and the fact that so many names, email addresses, phone numbers, and voter registration records were found for sale on the dark web further proves how easy it is for the bad guys to deploy an attack. One current example is when the FBI recently reporting that IRan has tried to send emails designed to intimidate voters.

“An enormous amount of data about U.S. citizens is available to cyber criminals” and foreign adversaries, said Ziv Mador, Vice President of Security Research at Trustwave. Check out this screenshot of the documented report: 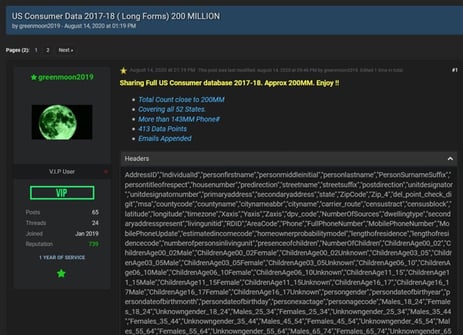 “In the wrong hands, this voter and consumer data can easily be used for geotargeted disinformation campaigns over social media, email phishing and text and phone scams,” he added, “before, during and after the election, especially if results are contested.”

As a takeaway, it’s important to be cautious of any potential threat or suspicious email. New-school security awareness training can ensure your users are prepared to report potential social engineering attacks.